You are here: Home / Fire Extinguishers 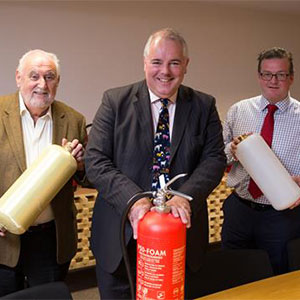 A unique UK-invented and manufactured composite fire extinguisher has been chosen by Heathrow Airport to protect its terminals.

Britannia Fire’s P50 – the first extinguisher to be cased in recyclable composite, with a 20-year lifespan – will be installed across the airport as part of its ambitious sustainability strategy, Heathrow 2.0.

Manufactured in rural Norfolk, the P50 will replace 5000 traditional metal extinguishers across Heathrow’s sites because of its lower carbon footprint and waste, and in-house maintenance.

As part of the partnership, Britannia Fire, which exports the P50 in 6kg, 9kg and 2kg forms across Europe and the Middle East, will be invited to promote its products to Heathrow’s supply chain at Heathrow Business Summits around the UK, where an estimated £93m of new deals have been created on the back of partnerships formed from the summits.

Chris Allen, Heathrow Procurement Business Partner, Engineering, said: “There were many reasons why the P50 appealed to Heathrow. Its lower carbon footprint was one. It is manufactured by a UK business and has a European supply chain.

“Traditional metal fire extinguishers typically come with parts imported from Asia and with the P50 we will instantly see a reduction in the supply chain carbon footprint by restricting transit from Asia to the UK.

“The P50 needs just a single refill in its 20-year life span, after which it can be recycled for re-use rather than being sent to landfill.”

The technology behind the P50 also meant fewer extinguishers were needed because it covered multiple risks, he said.

“The added benefit of being able to maintain these in-house reduces security clearances for service engineers coming on site.”

The P50 was a great example of innovation from a small and medium-sized business (SME), which would help “Heathrow Airport Limited reduce the environmental impact and support our national economy which fits well with Heathrow 2.0 sustainability strategy,” launched last year, he said.

Adam Watson, Terminal 5 Asset Manager and project lead, said: “Not only does the P50 support Heathrow’s sustainability objectives by reducing the asset cost base, it is also tightly aligned to our safety culture of getting everyone home safe.

“The traditional setup of a foam/CO2 dual extinguisher point, requires the user to make the correct selection of extinguisher type in the event of fire. The P50 is a single point extinguisher covering both A & B type fires. This eliminates the need for a human decision and ensures only the correct extinguisher can be selected; the P50. This reduces safety risk and increases our ability to get everyone home safe.”

“Heathrow is such a fantastic brand to be associated with. The airport has set out to work with SMEs, to help them grow and support UK business.

“To become part of such an illustrious supply chain and to have our product installed across one of the world’s premier airports is more than we could have hoped for when our managing director Roger Carr designed the P50, aimed at creating a longer life span and eliminating the need for costly annual servicing contracts, making significant savings for customers.”

“To be exposed to Heathrow’s supply chain at Heathrow’s Business Summits to extend knowledge of the P50 is invaluable and an incredible opportunity.”

The P50 is the first extinguisher with a multi-layer HDPE molded cylinder wrapped in Kevlar thread and cased in a composite shell cased in recyclable composite.

It is manufactured in an old railway building at Ashwellthorpe, where Britannia Fire employs about 40 people.

Mr Allen said that, with the launch of Heathrow 2.0 in February 2017, Heathrow Engineering and Procurement saw the opportunity to support innovative small and medium-sized businesses (SMEs).

“The introduction of Britannia Fire by one of our strategic suppliers was compelling, even more so with the innovative technology and sustainability credentials offered by its P50 extinguisher.”

Britannia Fire will refurbish the metal extinguishers to be replaced by P50s and donate them to charity to be shipped overseas.

Heathrow is one of the world’s busiest airports with 75 million passengers per year.

Heathrow Expansion Programme Director Phil Wilbraham said: “We’re keen to sustain a diverse supply chain and embrace innovation to help achieve new standards of delivery which includes our commitment to Heathrow 2.0. We will work with the supply chain for innovative and affordable solutions.”

Mr Spence outlined the P50 to the biggest strategic suppliers to Heathrow, including giants like Balfour Beatty and Mace at Heathrow, last November when he joined a panel with two of Heathrow’s biggest contractors, including Morgan Sindall, and procurement and sustainability directors, answering questions about the business and the P50, its benefits and why they developed the P50.

Former Government Chief Fire Officer, Sir Ken Knight, is a leading supporter of the P50 and described Britannia Fire as an “innovative British company developing significant savings for British industry” by taking costs out of annual maintenance while maintaining all the “effectiveness of portable firefighting.”

Sales of the P50 have seen a 37% growth in the last quarter alone. Britannia Fire is currently recruiting for another shift at its factory at Ashwellthorpe, near Norwich.