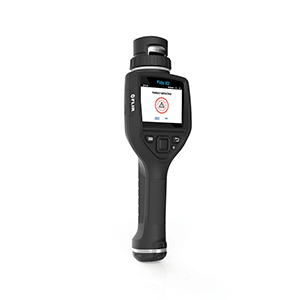 At less than 1.5 pounds and featuring a new ergonomic design, the Fido X2 is ultra-lightweight and durable for maximum portability. Intended to be used by state and local law enforcement agencies and first responders at security checkpoints or during high alert stages, the Fido X2 screens vehicles and personal belongings for explosives residue that might indicate contact with explosives or incendiary devices.

FLIR’s field-proven TrueTrace technology features a proprietary multiplexed luminescence technique for sensing trace levels of explosive chemicals and is uniquely formulated to detect a broad range of explosives. With analysis provided in ten seconds or less, law enforcement officers can quickly and accurately screen for threats to mass transit, sporting arenas, and critical infrastructure with confidence.

“The Fido X2 is the latest FLIR product that strives to ensure public safety, and does so at a price-to-value ratio that is unprecedented,” said Andy Teich, President and CEO of FLIR. “The extraordinary sensitivity of the Fido X2 means that users can detect the most minute explosives residue. Additionally, its focus on ease-of-use will allow it to be deployed broadly across many applications and its low price point will allow our life-saving technology to reach a wider base of customers.”

FLIR will showcase the Fido X2 for the first time at the International Association of Chiefs of Police Show on October 24 – 27 in Chicago, IL, booth #1640 and the Agency of Tomorrow Pavilion, booth #3211. The Fido X2 will be available globally through FLIR distribution partners in early 2016 with an MSRP starting at $9,995 USD. To learn more about the Fido X2, visit: http://www.flir.com/fidox2.