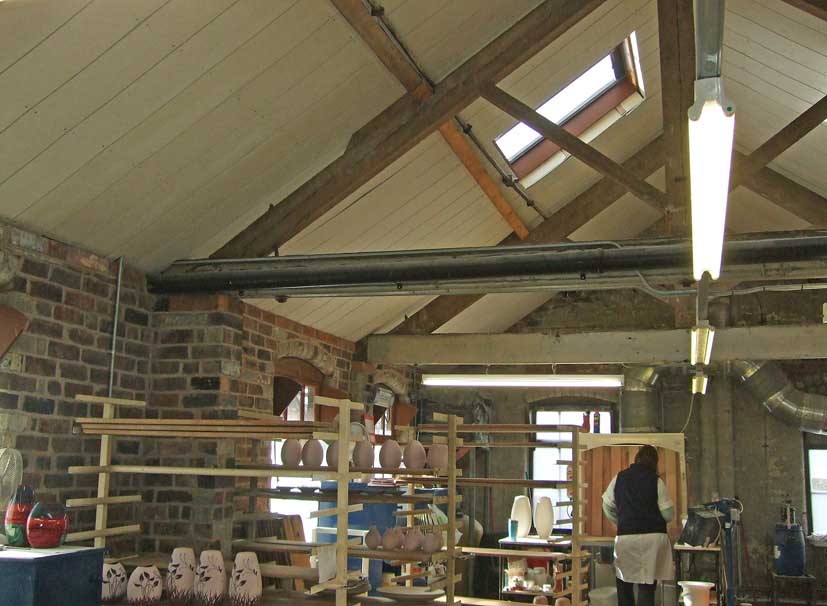 A Prince’s Regeneration Trust project to restore an historic pottery in Stoke-on-Trent illustrates the versatility of passive fire protection products from Promat UK.  Promat MASTERBOARD® and Promat SUPALUX® are being used to reproduce the effect of the old timber plank lining which was originally used at Middleport Pottery in Burslem.

The majority of the Promat boards will be installed in 200mm wide strips, to recreate the original look and feel of the pottery’s interior, whilst  providing the reliable passive fire protection demanded by today’s stringent Building Regulations.

“Although we hadn’t worked with Promat before, the products, with proven track record and third party certification, seemed ideal for this project,” comments Charles Wellingham, of architecture practice Feilden Clegg Bradley Studios in Bath. “When the project is complete, part of the building will be operating as a pottery again, so we needed robust fire protection materials that would give the right appearance and be resilient and hard-wearing.

“Promat MASTERBOARD® will be used extensively to create a new roof lining. The long-term performance of Promat SUPALUX® was an especially important consideration in its application as partitions to create indivdual units within the building for letting to other new businesses,” adds Charles Wellingham.

Promat SUPALUX® is a strong, lightweight and non-combustible building board with many fire protection and general-purpose uses. This high performance board can be used to provide up to 4 hours fire protection.

Promat MASTERBOARD® is a versatile Class 0 building board, suitable for use in a wide range of internal and semi-exposed applications, providing up to 30 minutes fire protection. Both products are simple to cut, fix and decorate, are resistant to the effects of moisture and will not rot or decay.

Now owned by the Prince’s Regeneration Trust, Middleport Pottery is undergoing a refurbushment project which will bring new life to this historic site. The pottery was built in 1888 by the Burgess & Leigh partnership, and went on to become the home of the internationally sought-after blue and white Burleigh pottery.

Picture caption: A Prince’s Regeneration Trust project to restore an historic pottery illustrates the versatility of passive fire protection products from Promat UK.  Promat MASTERBOARD® and Promat SUPALUX® are being used to reproduce the effect of the timber plank lining originally used at the Middleport Pottery in Burslem.

FIA Published White Paper; Third Party Certification: What does it mean for... UK City of Culture Gets Advanced Fire Protection