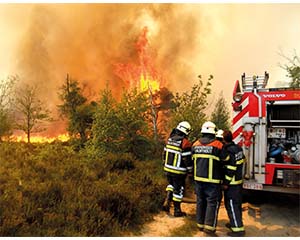 In addition to their general duties, firefighters based in Kalmthout – a village north of Antwerp in Belgium – are responsible for an environmentally sensitive nature reserve.  Known as Kalmthout Heath, the 8,000 hectares site is home to many species of flora and fauna and it becomes particularly susceptive to fires in the hot and dry summer.

To ensure the force is best equipped to respond to any incident in the village or on the heath, thermal imaging has been part of its armoury for many years.  However, the recent addition of a FLIR K50 has brought additional advantages for fighting wildfire, detecting roll-over, investigating chimney fires and in search and rescue situations.

“Thermal imaging is definitely not new to us,” explains commanding officer, Lieutenant Ronny van Riel.  “We started using the technology about 10 years ago and initially invested in a FLIR FireFLIR which works well and has proven its worth. Now we have added a FLIR K50 which is much more practical to carry.  It is mounted on its charger in the truck that always arrives first at the scene.

Firefighters can then clip it onto their kit so it’s instantly available when they need it.”

FLIR thermal imaging proved invaluable when a fire broke out on the Kalmthout Heath.  It spread rapidly and, in the end, around 600 hectares of this unique habitat were destroyed.  Extinguishing the fire was a massive operation involving many forces and thermal imaging was particularly effective at detecting ‘ground fire’.  This occurs when the wildfire is extinguished but smouldering continues, fuelled by subterranean roots and other organic matter.

Ronny van Riel continued: “Although not visible to the human eye, the fire rages underground and it can lead to an outbreak of fire several metres away from the last outburst.  Thermal imaging showed us clearly the areas on the heath where the ground fire was active.  And by further extinguishing and cooling down these areas we prevented spontaneous self-combustion.  In this instance we used handheld thermal imaging and also helicopters equipped with gimbal-mounted infrared cameras to detect the hotspots.”

More recently FLIR thermal imaging was used to look for a child that became lost on the heath.  Although on this occasion the child was found before night fall, the team knew it had the necessary equipment to pick up any heat signature in the undergrowth during the daylight or in complete darkness.

Protection again roll-overs
Thermal imaging is known for its efficiency with which it detects structures and victims in a smoke filled environment.  The FLIR K50 however is a radiometric device that can also measure temperature and this ability helps protect Kalmthout firefighters against the dangerous fire condition known as roll-over.  This is a mass of superheated gases that gathers at ceiling height or upper levels of the fire scene. It is not the materials in the room that are burning but the flammable gases they give off.  And when these concentrated gases reach ignition point, the temperature in the room rises rapidly.

“If we go inside a building and expect to be confronted with a roll-over, we now closely monitor the ceiling temperature with the FLIR camera while we try to cool down the smoke,” Ronny van Riel added. “If the temperature exceeds a certain value we leave to avoid endangering the lives of our firefighters. The camera is also used to help direct water from the fire hose.”

Chimney fires
Incomplete combustion of fuel is often the cause of a chimney fire.  Unburned volatiles are heated to their vapour state but not consumed due to a lack of adequate heat and oxygen within the appliance that is connected to the chimney.  When they escape into the chimney and come into contact with cooler surfaces they condense, forming tar-like deposits and soot.  Successive layers accumulate until either the chimney becomes blocked or they ignite.

“When we are called to a chimney fire we always use FLIR thermal imaging to determine the hottest spot in the chimney,” Ronny van Riel advised. “This hotspot is clearly visible on the thermal image and we also use the technology to monitor our progress in extinguishing the fire.”

He concluded: “A thermal imaging camera is a great tool for multiple applications.  With the FLIR K50 in our primary vehicle and the FLIR FireFLIR in our secondary, we are well equipped.  These cameras help protect the lives of our firefighters and help save the lives of others.”