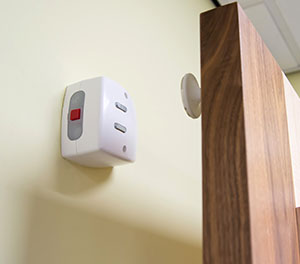 The Agrippa fire door holder is now available to buy instore and online at Toolstation.

Launched only four years ago by UK manufacturer Geofire, the battery-powered door retainer automatically releases the fire door in the event of the fire alarm sounding.

Unlike other wire-free fire door retainers, the Agrippa fire door holder records the sound of the fire alarm, storing the sound onto the device. If the building’s fire alarm sounds, the patented technology releases the door to prevent the spread of smoke, flames and toxic gases.

The sound activated, Agrippa fire door holder can now be bought at over 270 Toolstation branches, over the phone or online at www.toolstation.com. Due to its wire-free installation, the holder can be fitted in just ten minutes and installed by anyone competent in DIY. Full installation guides and step-by-step videos are available online.

Toolstation is one of Britain’s fastest growing suppliers of tools, accessories and building supplies to the trade, home improvers and self-builders.

“What’s more, the Agrippa holder uses our Geofire patented ‘listen and learn’ technology to record the sounds of the building’s specific fire alarm, so false activations from loud noises are eliminated.”

The Agrippa door holder has been installed into buildings including schools, care homes, hospitals, hotels and offices. Competitively priced and easy to install, the device is particularly useful in busy corridors to create free movement around the building. A chain keeper or floor mounted bracket can also be bought from Toolstation for non-standard installations.