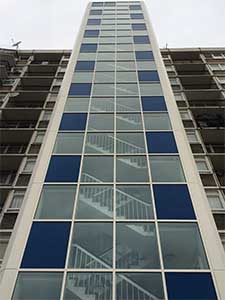 The Waltham Forest completion comes only weeks after the London Fire Brigade (LFB) announced that there had been 684 fires in high rise flats in 2014, with the LFG launching a Know the Plan campaign to better ensure people know what to do in the event of fire.

Although fatal fires in high rise buildings are very rare, nine people died at Lakanal House, Camberwell in 2009.  A contributory cause was a lack of fire resistance around doors, meaning that the fire wasn’t adequately contained.

Underlining how most fires begin from an insignificant cause, the Lakanal House fire was started by an electrical fault in a TV in a ninth-floor flat.

Wrightstyle, which is based in Devizes, Wiltshire, but supplies its specialist systems worldwide, supplied, fabricated and installed its glazing units to the Leyton Green tower.

The new external glazed staircase, with some internal screens and fire doors, has been certified to provide 60 minutes of both fire resistance and prevent the passage of heat and harmful gases.

The overall design is therefore intended to give residents a safe escape route in the event of fire, as well as providing fire fighters with secure and easy access.

Fast Cars and New Patents – it’s all happening for FFE at FIREX!